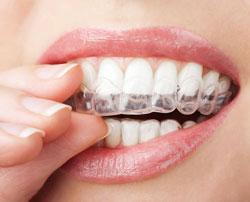 Invisalign is an innovative orthodontic method for straightening your smile that comes with multiple benefits. One of the major benefits of Invisalign is that it is discreet, unlike more traditional tooth straightening methods, such as metal braces. Invisalign straightens the teeth with soft aligner trays that are clear so they are not readily noticeable to others. The clear aligner trays allow you to straighten your teeth discreetly. Dr. Ken Yasuhara is your dentist for Invisalign in Honolulu, HI.

How Does Invisalign Work?

Invisalign straightens the teeth with aligner trays rather than the brackets and wires typical of braces. The aligner trays are custom made for each patient and a separate tray is created for each row of teeth. The trays exert gentle pressure on the teeth to move them toward the desired position. Each set of aligner trays is only worn for a few weeks before being replaced with the next set of trays. With each new set of trays, the positioning of the teeth changes slightly until they are completely straight, which takes about twelve months total, on average.

Invisalign offers multiple benefits as an option for straightening your smile. A primary benefit that many patients appreciate is the discreetness of Invisalign’s aligner trays. Since the aligner trays are clear, they are barely noticeable to others. Another benefit of Invisalign is that the aligner trays are comfortable to wear since they are made from a soft and flexible plastic material. Further, the trays will not irritate the inside of the mouth, as can be the case with traditional metal braces, which have hard brackets and wires that can scratch or poke the gums.

An especially exciting benefit of Invisalign is that the aligner trays are removable! Since the trays can be taken out to eat, there is no worry about food particles becoming trapped in between the teeth and trays. Additionally, brushing and flossing are made easier when the trays are temporarily removed to clean the teeth. Your dentist for Invisalign in Honolulu can help you decide if it is the right teeth straightening option for you.

It is possible to straighten your smile both comfortably and discreetly when you choose Invisalign for straightening your smile. For Invisalign in Honolulu, HI schedule an appointment with Dr. Yasuhara by calling the dental office at (808) 947-8900.

Ready for a new dental experience? REQUEST AN APPOINTMENT NOW!